This has been a rough year for many businesses in a broad range of industries - perhaps including your company.  As the New Year beckons, you might want to reward employees who rose to 2020's considerable challenges and outperformed.  One approach is to reward loyal workers with year-end bonuses.

Bonuses remind employees that you value their services 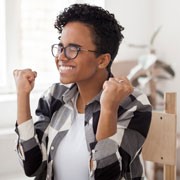 and that your company's success and survival are inextricably linked. According to staffing agency Robert Half, the benefits of bonuses are evident to most executives. A recent survey showed that more than three-quarters of managers intend to offer year-end bonuses this year. Almost half plan on keeping bonuses the same this year — or even boosting them.

But there's more to giving out year-end bonuses than putting a little something extra in a pay envelope or adding to a direct deposit. Consider these four tips for rewarding employees, including one for employers that aren't planning to pay bonuses this year:

Year-end bonuses are taxable to employees, just like any other form of compensation. But the amounts paid out are deductible by the employer. In this case, timing is everything. Generally, employees are taxed on bonuses in the year in which they're received. Therefore, if you defer payment to January, the income isn't taxable until 2021. Conversely, if you pay year-end bonuses to employees in December, you can deduct them on your 2020 return.

Note on special rule: An accrual-basis company can currently deduct bonuses paid as late as 2 1/2 months after the end of its tax year. In other words, a qualified calendar-year company has until March 15, 2021, to pay bonuses and still deduct them on its 2020 return.

There's a lot of decision-making surrounding year-end bonuses. Employers must determine who gets how much and when. To prevent rumors and resentment from employees who don't receive as much as they may think they're due, explain the "whys" behind your bonus awards. For example, if bonuses are based on performance, provide the formula used to arrive at the actual amount and several hypothetical examples.

Alternatively, you might offer bonuses for meeting certain team goals or as rewards for completing special projects. In these cases, accentuate the metrics met by the entire team rather than single out one employee for his or her performance.

Finally, you could offer general year-end bonuses that aren't based on meeting specific goals or metrics. Such bonuses typically are intended to reward loyalty and to foster a long-term commitment to a company.

Traditionally, many employers paid bonuses without offering much rhyme or reason to who received them and why. These days, employers are more likely to trumpet their generosity.

However, you need to be careful, particularly if bonuses are going to just a select few or if several employees are being excluded. If, for example, you're rewarding an entire team, gather the group (virtually, if necessary) to make your announcement. If you're giving a year-end performance bonus to only a couple employees, inform them in one-on-one sessions.

In both types of meetings, explain how the bonus amount was determined. If recipients or employees who aren't receiving bonuses have questions, address them promptly and candidly. Take constructive employee feedback into account and perhaps apply it to next year's bonus program.

Despite your best intentions, your business may not be able to afford to pay year-end bonuses in 2020. This doesn't mean you should throw up your hands and do nothing. Depending on your circumstances, you might be able to offer other incentives, such as extra vacation or sick days or more flexible hours. Workers frequently value these perks. A Robert Half survey indicates that most employees consider flexible work scheduling to be the best company fringe benefit.

In this current environment of social distancing, morale-building activities such as holiday parties and other in-person events may not be possible. Be innovative about the ways you can reward employees for a relatively low cost. One idea is to "host" a virtual holiday party where food and beverages are delivered to employee homes or to organize a Secret Santa exchange through the mail.

In any event, keep your employees in the loop. If you can't pay out traditional bonuses this year, be upfront about it. And whether you pay bonuses or not, sincerely express your appreciation for your employee's work this year. It's not just about money.

Year-end bonuses have long been a staple of employee benefit programs. We can help you determine whether your business's budget allows you to reward employees with bonuses this year.

Sign up for our bi-monthly newsletter for business owners.

Register today for a Free
Income Tax Diagnostic
from MKW.

Minimize your taxes &
free up cash to reinvest
in your business.